Remember Remember the Fifth of November

Seeing as we are on a bit of a roll with seasonal events at the moment I thought I use this week’s post to discuss Guy Fawkes Night with you all. Guy Fawkes Night or Bonfire Night as it is commonly referred to falls every year on the 5th of November.

My six year old son knows the date as the night that fireworks go off and we get our wellies on, scarves on and torches out, to troop en-masse down to the usual local place and congregate around a huge bonfire. He has of course heard about Guy Fawkes, however sparklers and hot dogs with fried onions hold more fascination at this stage. 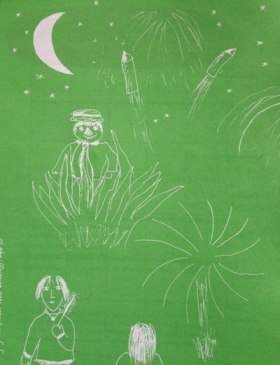 Drawing by Nell Zinovieff, aged 10 at the time, from the 1995 Dodo Pad

The true origins of the commemoration stems from a failed plot back in 1605 where, on the fifth of November a group of English Catholics attempted to blow up the Houses of Parliament in London and in so doing kill the Protestant King, James the First. Guy Fawkes was caught guarding the stash of explosives, arrested and the assassination attempt was averted.

While one would not dream of applauding the blowing up of politicians, although I suspect nowadays there are many who would love to see some of them suffer a less permanent downfall, one can’t help but admire the plucky plan. Given that the death penalty was handed out most liberally in those days it must have taken some gumption to plan such a daring plot.

It fascinates me that this single act of terrorism, which basically is what the plot boiled down to, regardless of the motives, is still remembered so vividly today. Great Britain has such a colourful history and I adore turning the page in my Dodo Pad each week to find a new fact, some nugget of information previously unknown or an amusing tit-bit. As the esteemed Lord Dodo has been collecting and sharing these facts and foibles for over forty six years, there are some corkers to be enjoyed and many bring back memories of history lessons.

My question for you then today is this: What historical fact or lesson do you best remember from your childhood? I have a fond memory of the day my history teacher Miss F shaved the leg of one of my fellow students to illustrate how the ancient Greeks and Romans removed hair and favoured hygiene. Poor lad had a bald patch down one leg that caused much hilarity during Sports over the next two terms until it grew back sufficiently. I certainly never forgot the lesson!